A death in the sisterhood 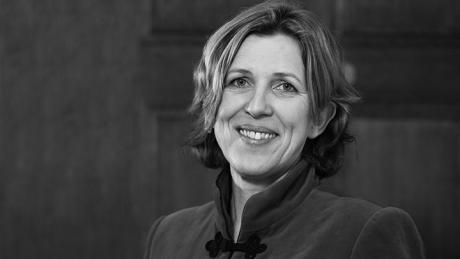 Our friends, it is said, are our elective families. In her cruelly untimely death in Berlin on Thursday, Sylke Tempel showed us all just how large, far-flung and loving her elective family is. I count myself lucky to have been a part of it.

Dr. Sylke Tempel was the editor of Internationale Politik, the house magazine of the German Council on Foreign Relations (DGAP) and its sister online publication, the Berlin Policy Journal. Her charm, warmth, and level-headedness (not to mention a deep erudition, lightly worn) made her a sought-after counselor, moderator, and panelist in Berlin and well beyond. The most inane political chat shows became worth listening to if Sylke was one of the guests, wearing one of the bright red or orange outfits that she knew made her look fabulous.

Sylke was also one of my dearest and closest friends, a sister-in-arms in all the fights we cared about: for Germany’s commitment to Israel, Europe, and the West; for the advancement of women in foreign and security policy; and against bad food, bad wine, bad writing, and all-male panels.

Even an ocean apart, we emailed, texted, and tweeted at each other almost every week. I was carelessly certain we would grow wrinkly—yet never less than chic—together, laughing uproariously on one of the side benches of the Munich Security Conference until well into our eighties. (Hey: If the men could do it for five decades, so could we.) No more.

Not the least of Sylke’s sterling qualities was her vivid sense of humor, and her impeccable taste as a writer and editor. I suspect she would have raised an ironic eyebrow—accompanied by that wonderful toothy grin that could light up a room—at a final paragraph that read like this:

„Sylke Tempel was returning in the late afternoon from a workshop on transatlantic relations hosted by the German Foreign Ministry at the Villa Borsig, its guest house on Tegeler See, as an epic gale with winds of more than 110 miles an hour raged over Berlin, ripping countless trees out of the earth and slamming them back down with the force of a sledgehammer. One of those trees smashed into her car, killing her instantly and gravely wounding one of the other two women passengers. Only that week, Dr. Tempel had been putting the finishing touches on a co-authored plea for preserving the transatlantic relationship in the era of Trump.“

„Constanze, dear“ she would have said, arching that eyebrow even further: „Maybe a little less of the whole ,dark and stormy night‘ thing, don’t you think? And wouldn‘t you agree with me that the transatlantic references are a little… heavy?“

Ouch. Well, yes. But I didn’t write that, and I’d like to think I wouldn’t have. Life did. And its taste in storylines really sucks. The other two passengers are long-time friends of mine as well.

Many, many texts were magically transformed and improved by passage through Sylke’s energetic and careful hands in her near-decade as the editor of Internationale Politik—,a magazine that before her time was deservedly nicknamed „Valium of the Republic“ by insiders, and which she made timely, crisp, and enjoyable to read. Sylke, who had studied history, political science and Jewish studies, and worked in Israel as a journalist for a decade, created the Berlin Policy Journal in order to make German foreign policy debates accessible to our often understandably confused friends and allies in clear English. The process of translation often clarified the thinking as well. Craftily, she would work you up to write with enthusiasm about things you never knew you wanted to write about—such as, in my case, an essay on movies and TV series about the Cold War.

Like all good editors, Sylke was a first-rate writer herself, with a remarkable breadth of interests, from strategy and foresight to a biography of Freya von Moltke, the wife and then widow of Helmuth James Graf von Moltke, one of the conspirators against Hitler. In the last chapter, titled Abschiede (Goodbyes), she explains what gave Freya, after the devastating loss of her beloved husband and so many of her closest friends, the strength to live to the ripe old age of nearly 99 in Vermont, having devoted her entire life to reconciliation between Germany and its erstwhile enemies: „she had a gift for joy,“— a gift rooted in her profound humanity, and her desire to live for something larger than herself.

Those of us happy enough to have counted Sylke as a friend would recognize not a little of her in this portrait of Freya. Her moral and political compass was unerringly firm, sustained by a discreet and liberal form of Catholicism. Yet she would offer empathy even to those she passionately disagreed with (or disapproved of). Sense, sanity, and decency in all things were her hallmarks; yet she endeared herself to us at least equally with her irrepressible zest for the good things in life.

„Templine“ (as her friends would sometimes call her) had a commendable partiality for bitter chocolate and single malt. A big advantage of my move to Washington, in her view, was that I could now smuggle Sherman’s cigarettellos for her from America. At every Munich Security Conference, there was a point when we’d ping each other conspiratorially—usually around Saturday afternoon—„are we annoyed enough yet?“ and head straight to Lodenfrey, the Bavarian version of Bergdorf Goodman’s. In the evening, she would rally the security sisterhood (no, we don‘t use the acronym) to an informal and often hilariously funny offsite dinner at her favorite Italian trattoria.

Sylke was also a generous mentor to many younger women, not least in her role as chair of the German section of Women in International Security (WIIS.de) from 2013 onwards (an office that I had held before her). We had shared the experience of having been belittled and condescended to in our younger years for wanting to succeed in Germany’s heavily male-dominated foreign policy and security community. Both of us wanted to make sure the next generation was spared this kind of soul-eating repression.

Our friend’s most admirable trait was her intense capacity for love. For her parents, of whom she spoke fondly, and whom we met at her 50th birthday party. For her nephews and nieces, and her godchildren, whom she was helping to raise, with equal doses of good advice, skiing trips, and silly movies (the Minions were a favorite). And above all for her partner, Judith, whom she leaves behind.

How I wish I had the power to write a better ending for this story: a Superwoman, perhaps, who darts down from the sky and stops the tree from crashing down. Yet in my sadness I take heart from the fact that Sylke has written our stories, too. She leaves behind a network of friends connected by her memory and her example. We will just have to be like Freya, and stick around to do good things.

God knows there is work to do, as the German elections on September 24 showed. Two days later, I tweeted at her: „We’ll just have to run ourselves next time.“ Sylke’s answer was: „Honey, you bet we’ll run.“ Ten minutes later: „@ConStelz we’ll found the Party of the Cheerful.“

We’ll have to do that without you now, Sylke. Meanwhile, I’m raising a glass of single malt to you, wherever you are.

Constanze Stelzenmüller is Robert Bosch Senior Fellow at the Brookings Institution in Washington, DC, and a former chairwoman of WIIS.de